Objective: The ability of plasma activated liquids (PALs) to disinfect oral bacteria in both planktonic and biofilm forms were investigated.

Results: The PALs could inactivate 38% of the planktonic bacteria and induce 25% biofilm reduction. It was further found that the PALs aged for 24 hours were not effective on bacterial disinfection. However, PALs were found to be non-toxic for mammalian cells. No viability change of fibroblast cells was detected in PALs. Hydrogen peroxide content increased in PALs than that in untreated liquids.

Conclusion: The PALs showed instant antimicrobial effects on oral bacteria of S. mutans in both planktonic and biofilm forms. However, PALs could not completely disinfect all the bacteria and were not able to inhibit the bacteria recovery. It was also found that the PALs were non-toxic to mammalian cells.

Non-thermal plasma treatment has been widely considered as an effective method for sterilization. According to Koban I, et al.[1], application of plasma treatment was much more effective than chlorhexidine digluconate (CHX) in disinfecting biofilms.  In a study by Xiong Z, et al. [2], plasma was found to penetrate biofilms and effectively deactivated all the bacteria in 15μm thick biofilms. Another study by Rupf et al. also confirmed the disinfection capability of plasma treatment for dental biofilms [3-5]. Non-thermal atmospheric plasma could deactivate gram positive bacteria (S. mutans)[6], gram negative bacteria (P. gingivalis)[2] and fugus (C. albicans)[7] in the form of biofilms.

Even though it is effective in bacterial sterilization tool, direct plasma treatment is a little challenging to delicate surfaces and tissues [8]. Direct plasma application may cause slight yet measurable tissue damage due to the high energy electrons and ultraviolet (UV) photons generated during plasma excitation [8,9].

Another indirect application of plasmas  [9-11] is treating liquids to generate antibacterial species in the liquids. There is evidence that bacteria can be killed by contact with liquids that had first been activated by non-thermal plasmas. This kind of plasma treated liquids with disinfection capability is called plasma-activated liquids (PALs). PALs can be considered as a convenient disinfection solution by overcoming the lack of portability of the plasma systems. A study by Ercan UK, et al. [9] demonstrated plasma-activated PBSgave rapid inactivation of various pathogens. Kamgang-Youbi G, et al.[10] also showed the efficacy of plasma activated water on disinfecting planktonic bacteria and biofilms. In addition, PALs are also beneficial to the treatment of contaminated water. Du CM, et al. [11] developed a gliding arc discharge reactor to treat E. coli contaminated water. Almost 100% of the bacteria were killed in less than 3 min when the contaminated water was passed through the plasma reactor and circulated at defined flow rates [11].

The study of reactions between plasma and liquid is an important topic since plasma comes in direct contact with biological fluids in most biomedical applications [12]. However, the exact mechanism and contribution of various plasma species to the biological effect are not yet fully understood. This is due to the complex interactions [13] at the plasma-liquid interface and subsequent reactions in the liquid phase. Among various chemical species produced by plasma at the gas-liquid interface, OH· radicals, atomic oxygen, ozone and hydrogen peroxide are the main reactive oxygen species (ROS) generally accepted to play dominant roles in the inactivation process [14]. Contribution of nitrogen-based reactive species (RNS) must also be considered. Examples of RNS include nitric oxide and its derivatives formed within water, including nitrites, nitrates, and peroxynitrites [15,16].

The aim of this study is to assess the ability of plasma activated liquids (PALs) in disinfecting oral bacteria in both planktonic and biofilm forms. PBS and 0.9% saline were activated by the non-thermal atmospheric plasma, and their antimicrobial properties were tested on S.mutans in both planktonic and biofilm states. The H2O2 concentration in the PAL was assessed in order to understand the mechanism of PAL inactivation.

PBS (pH 7.4) was purchased from Sigma-Aldrich (St. Louis, MO, USA) and saline (0.9% NaCl) was purchased from Hospira (Lake Forest, IL, USA). Figures 1 and 2 sketches the procedures of PAL preparation and PAL treatment of oral bacteria and mammalian cells. PBS and saline were used as the liquids in this study. 250 µl of each liquid was placed into the wells of a 48-well plate. A non-thermal atmospheric plasma brush described in our previous study [4] was inserted into each well to treat the liquids. The plasma brush was operated at 6 mA using 3000 sccm argon and 30 sccm oxygen flow rates [4]. Liquids were treated with the plasmas for 5 minutes. 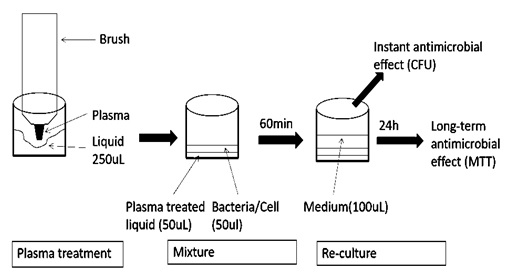 Figure 1:  The procedures of PAL treatment on planktonic oral bacteria or mammalian cells.

A. Bacteria Culture and Biofilm Culture [4]

B. Disinfection Against Planktonic Bacteria [17]

In order to assess the instant antibacterial effect, PALs (50 µl) was mixed with 50 µl bacterial suspension. Final bacteria density was 107 CFU/mL. The mixture was keep at room temperature for one hour, and a serial 10-fold dilution was taken. Then, 10 µl of each dilution was spread on square agar plates. The colonies were counted after 3 days.

The long-term antibacterial effect was also assessed. Another set of samples was prepared as described above. After the treatment of PAL, 100 µl fresh TSB was add to each well to provide nutrition, and the plate was incubated at 37°C for 24 hours. Finally, the recovered bacteria were quantified by MTT assay.

Biofilms prepared in Section B were used to test the disinfection effect of PAL. After removing the TSB medium, 50 µl of PAL was added to each well. The well plate was placed on a shaker for one hour to let the PAL and biofilm react completely. Afterwards, the PAL was removed and the MTT assay was performed to assess PAL disinfection efficiency.

Additional sets of samples were prepared as above and used to assess the long-term effect of PAL on the biofilm. After PAL generation, 200 µl fresh TSB was add to each well, and the well plate was incubated at 37°C for 24 hours. Finally, the recovered biofilm was quantified by MTT assay. 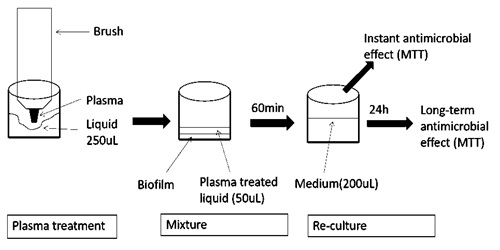 Figure 2: The procedures of PAL treatment on S. mutanoral biofilms.

PALs were first prepared by exposing the liquids to plasma brush for duration ranging from 0 to 5 minutes. To assess PAL effect on mammalian cells, 150 µl of 2×104 cells/mL fibroblast cells were mixed with 50 ul PALs in the wells of a 96-well plate. The mixtures were then placed on a shaker for one hour. After incubation at 37°C for 24 hours, cell viability was assessed by MTT assay [18].

After PALs was prepared, the H2O2 content was measured to determine its concentration in medium. The H2O2 concentrations in PALs were quantified using a Hydrogen Peroxide Assay Kit (National Diagnostics, Atlanta, GA, USA) by following the manufacturer’s instructions.

SPSS statistics software (IBM, Armonk, NY) was used to perform the one-way analysis of variance (ANOVA) on all results. Turkey honestly significant difference (HSD) post hoc test was performed. If P<0.05 is detected, it is considered to have a statistically significant effect at the 95% confidence level.

A. Antimicrobial Effect of PAL on Planktonic Bacteria

Figure 3 shows the antibacterial efficacy when planktonic S. mutans were exposed to PALs for one hour. Both PALs (PBS and saline) carried strong antimicrobial properties. As compared with the untreated controls, plasma activated PBS caused 38% bacteria reduction (P < 0.05), and plasma activated saline inactivated 22% of the bacteria (P < 0.05). Long-term antibacterial effects of PALs on planktonic S. mutans cells were also studied. As shown in figure 4, there was no significant difference (P > 0.05) on the bacterial survival percentage between the untreated liquid controls and the PALs. 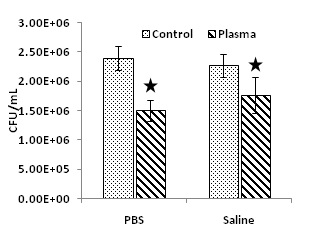 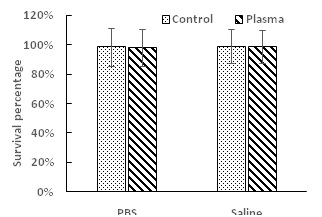 B.  Disinfection Effect of PAL against Biofilms

The disinfection efficacy of PALs against biofilm is shown in figure 5. Both PALs (PBS and saline) also carried strong antimicrobial properties against biofilms. As compared with the untreated controls, plasma activated PBS caused 25% bacterial reduction (P < 0.05), and plasma activated saline caused 18% bacterial reduction (P < 0.05). The long-term anti-bacterial effects of PALs on S. mutan biofilms were also studied. As shown in figure 6, there were no differences (P > 0.05) between the regular non-exposed biofilms and the biofilms exposed to PALs. Co-culture of the biofilms with PALs for 24 hours did not inhibit bacterial growth. 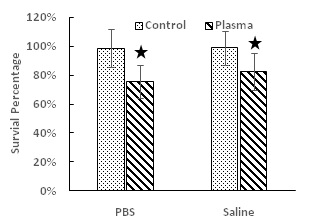 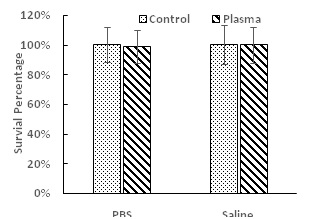 Figure 6: Long-term antimicrobial effect of PALs on S. mutans biofilms after 24 hours incubation with PALs at 37ºC. No statistical difference was observed (P > 0.05). 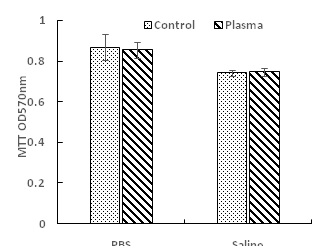 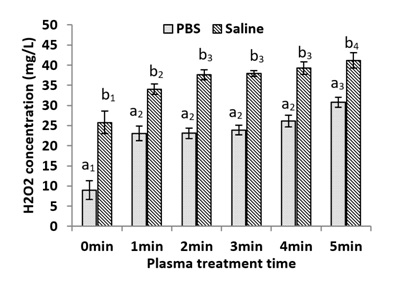 Figure 8: H2O2 concentration change in PALs with plasma activation time. Different notions of a and b indicate significant difference (P<0.05) exits between groups.

The aim of this study was to investigate the disinfecting performance of PALs. PBS and saline were exposed to plasma treatment to produce PALs. The results showed that PALs could successfully inactivate bacteria in both planktonic and biofilm forms. It is known that PALs could be a broad spectrum antimicrobial agent [9]. Kamgang G, et al. provided evidence that plasma activated water could kill gram-negative  and gram-positive bacteria[19]. With PALs, microorganisms were killed without being directly exposed to the plasma plume. Thus, PLAs could be used for disinfect delicate surfaces and tissues, which could be slightly damaged by direct plasma treatment [8,9]. By using PALs, tissues are not directly exposed to plasmas and thus damages resulting from the plasma treatment can be prevented. Using PALs could expand the range of potential applications for plasmas.

The exact species and products generated in PALs have not yet been fully understood. More detailed chemical characterization of the PALs is needed in order to understand their antibacterial property. As reported in literature hydrogen peroxide is one of the major species generated in PALs [26]. In this study, therefore, the concentration of hydrogen peroxide in the PALs was measured. The largest amount of H2O2 was found to be 42 mg/L after 5 minutes’ plasma exposure on saline. According to literature [24], the amount of H2O2 required for inactivation was 500mg/L. This finding suggests that PALs may carry other species or products that are responsible for their antimicrobial property, which is consistent with Ercan’s study [9].

This study has limitations. First only one kind of gram-positive oral bacteria was tested. Other strains including gram-positive, gram-negative and yeast existing in oral environment should be further studied. In addition, more detailed chemical characterization of the PALs should be conducted in order to fully understand the disinfection mechanisms of PALs. The shelf life of the plasma-generated antimicrobial species in PALs is also critical. Therefore, experiments should be performed to assess the aging effects of PALs on antimicrobial efficacy.

The PALs showed instant antimicrobial effects on oral bacteria of S. mutans in both planktonic and biofilm forms. However, PALs could not completely disinfect all the bacteria and were not able to inhibit the bacteria recovery. It was also found that the PALs were non-toxic to mammalian cells. Plasma treatment could increase the concentration of hydrogen peroxide in the liquids, but the amount was not high enough to completely inactivate all bacteria.

Copyrights: Yu Q, et al. (2021). This is an open-access article distributed under the terms of the Creative Commons Attribution License, which permits unrestricted use, distribution, and reproduction in any medium, provided the original author and source are credited.

Therapeutic Modalities in the Management of COVID-19: A Worldwide Landscape

Ceramic Inlay Effectivness Versus other Restorative Treatments: A Literature Review

Open Access by Magnus Med Club Ltd is licensed under a Creative Commons Attribution 4.0 International License. Based On a Work at magnusmedclub.com