Purpose: Surgical complications in the anterior mandible had been reported. These complications increase the interest into the content and the vascularity of the area. Cone beam computed tomography (CBCT) was used for investigating bony structures. The aim of this study was to evaluate the anatomical features of labial and mental foramina.

Methods: Foramina on the outer surface of the anterior mandible were evaluated in coronal, sagittal, and axial planes of 104 CBCT scans.

Conclusion: Mandibular labial foramina are frequently seen in CBCT. Wide variations were seen in different neurovascular anatomical landmarks in the anterior mandible including accessory mental foramina. These findings should be considered when planning for anesthesia and surgery in this region.

Many complications are associated with surgical interventions in the anterior region of the mandible. Sensory disturbances of the mental nerve after dental implant placement have been reported. Loss of lip sensation may further be complicated by lip biting, impaired speech, and diminished salivary retention, which have a significant impact on patient's lifestyle [1].

Complications associated with symphyseal bone grafts include intraoperative bleeding, wound dehiscence, mental nerve injury, pulp canal obliteration, and a loss of pulp sensitivity in the anterior lower teeth [2,3]. To avoid these complications, total knowledge of the bone anatomy is a must [4]. Before any surgical procedures in the mandibular premolar area, the anatomy of the mental foramen (MF) and canal, as well as the presence of accessory mental foramina (AMF) should carefully be investigated [5].

CBCT is used for diagnostic purposes in oral and maxillofacial surgery and endodontics, particularly for its low cost, easy accessibility and low radiation [6,7]. It was considered to have better accuracy and diagnostic value than periapical films in the detection of interradicular periodontal bone defects [8]. Detailed information was obtained about dentoalveolar structures with CBCT [9]. CBCT is capable of providing sub-millimetre resolution in images with short scanning time [10]. Cone beam computed tomography (CBCT) was used for investigating structures inside bone without dissection. The lingual foramina and canals are from the structures studied by many investigators [11,12].

Many foramina are present on the lingual aspect of the anterior mandible which may have variations in number and position. It is typically visualized as a single round radiolucent canal with a well-defined opaque border [11,13]. Actually, blood vessels and nerves running through these lingual canals often generate anastomosis with neurovascular structures from the mandibular canal and its branches [14]. The median perforating canal (MPC) of the mandible is the canal connecting the median lingual foramen (MLF) and the labial foramen (LaF) [15]. It was previously concluded that the MPC of the mandible, rarely found in humans, is seen in all specimens in Macaca fascicularis because they have no mental protuberance [16]. A high prevalence of these structures was found in many reports [11,12,17,18].

The labial extensions of the lingual foramina and canals were studied by many investigators [17,19]. CT images were used for the identification of the intrabony canals and for the localization of canalicular communications connecting the labial and lingual mandibular plates. These communications mainly appeared as a crossing of the lateral lingual with the incisive canal, but also as an extension of the median lingual canal to the labial plate [19]. MPC was reported in one cadaveric study of the human mandible [15].

The MF as an important mandibular anatomical landmark is located bilaterally. Its location, size, and shape have been studied by many investigators [20-22]. In the current literature AMF, mandibular incisive canal, and buccal foramina (BF) are frequently documented in various species and ancient skulls in addition to living subjects [23-25]. CBCT analysis for labial and buccal mandibular foramina, however, has not been widely evaluated or used in clinical dentistry yet. The term labial foramen is not used up till now for describing foramina on the labial surface of anterior mandible. The term additional foramina is used by some investigators in describing foramina on the labial and lingual surface of anterior mandible [25]. There is a need to establish a well-defined profile for the anatomical characteristics of labial foramina in CBCT. Therefore, the aim of this study was to assess the occurrence and anatomical features of mental, accessory mental and labial foramina and their bony canals in inter foraminal region of the mandible using CBCT.

Table 1: Distribution of foramina along the studied CBCT scans.

Table 2: Distribution of labial foramina along the studied CBCT scans.

Figure 4: Appearance of the labial foramen (LaF) in different views: a) coronal, b) sagittal, and c) axial images.

Figure 5: Different locations of labial foramina: a) symphyseal or midline, b) lateral, c) alveolar or interseptal, and d) sub mental. 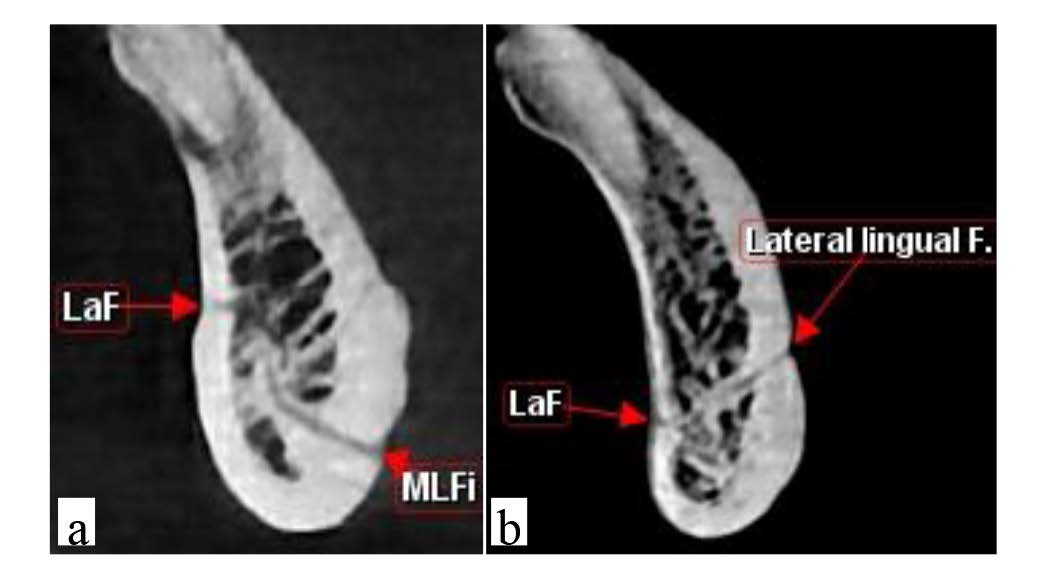 Complications related to surgical interventions in the anterior segment of the mandible had been reported such as unexplained bleeding and sensory disturbances [26,27]. These complications increases the interest into the content and the vascularity of the area [28-30]. To avoid intraoperative and postoperative hemorrhage, neurosensory loss, the locations of neurovascular structures must be identified before implant placement, genioplasty, chin graft, or endodontic surgery in the anterior mandible. Osseous neurovascular structures include the MF, the AMF, and LaF or buccal foramina [31-33].

In this study, identified defects of the buccal cortical plate were classified as MF, AMF and LaF. At least one MF was found in both sides in all the studied scans (100%). These results are in agreement with many previous studies [5,34,35]. We considered AMF as a foramen connecting with mandibular canal and smaller than MF. In our sample of Egyptian cases, there was a relatively high incidence of AMF. This result is in accordance with the conclusion of Hanihara, et al. [36] that it is most common in Central Asians and Subsaharan Africans among recent human populations.

There was a prevalence of the labial foramina than accessory mental foramina for all CBCT images, with significant variations of their locations and anatomical characteristics. Nutrient foramina in the buccal cortical plate were found by Naitoh, et al. [24] to be much more common than AMFs. Labial foramina could be detected in different locations. Symphyseal, lateral symphyseal, sub mental and canine region foramina could be observed. In most instances labial foraminal canals were found in the lower half of mandibular height and were directed to the middle of the mandible and lingually. To the best of our knowledge studies investigating the location and orientation of labial foraminal canals are rare. Additional foramina was the term used by Kabak, et al. [25] to describe a group of foramina other than mental and AMF which were located on the buccal and/or lingual surfaces of the mandibular body.

Many of the lingual and labial canals were connected indirectly through contacting the incisive canal. These results are inaccordance with that of Trikeriotis et al. [19] whose results showed anastomosis between lingual canals with the incisive canal and presence of a network or a plexus of canals in the anterior region of the mandible.

In our study five cases showed higher positions of LaF. Of course, possibility of nutrient canals which was postulated by many researchers should be considered [17-19]. Evidence-based studies do not clearly show this.

In this study, the labial foramina showed high incidence than previously considered for them. It is not safe to recommend any bone graft or implant surgery in the anterior region of the mandible without CBCT study of the region. In our Egyptian sample, there was a significant variability in the mandibular LaF and their bony canals anatomy and location. This was in agreement with the finding of other studies [16,17,19]. Knowledge of the anatomical variations of neurovascular canals is necessary to preserve these structures during surgical procedures of mandible and preventing complications. To the best of our knowledge, this study was the first to investigate the radiographic anatomy of labial foramina of the anterior mandible in Egyptian population.

The results of this study showed that mandibular labial foramina and bony canals are frequently present in mandibles with wide variations in CBCT. In the lateral to symphysis, the incidence of foramina was the highest in this region. The prevalence of accessory mental foramina in Egyptian population is relatively high. These findings should be considered in diagnosis and planning for anesthesia and surgery in the lower anterior region to prevent possible complications. A preoperative thorough investigation of the symphyseal and parasymphyseal regions using CBCT is highly recommended when targeting surgical interventions in these areas.

The authors would like to acknowledge Myray dental radiology center for suppling the dicom files. The authors have no conflict of interest to declare.

Funding: This study was funded by X (grant number X).

Copyright: Marzook HA, et al. © 2019. This is an open-access article distributed under the terms of the Creative Commons Attribution License, which permits unrestricted use, distribution, and reproduction in any medium, provided the original author and source are credited.

Therapeutic Modalities in the Management of COVID-19: A Worldwide Landscape

Ceramic Inlay Effectivness Versus other Restorative Treatments: A Literature Review

Open Access by Magnus Med Club Ltd is licensed under a Creative Commons Attribution 4.0 International License. Based On a Work at magnusmedclub.com